The Region of Nowy Wiśnicz

The cultural scenery of Nowy Wiśnicz is a valuable and fragile commemoration of the distant past. It was landscaped in major part in the 17th century and without significant changes, it continues on its structure up until now. The central part of the region is the town, which was settled in 1616 based on the Magdeburg law. It was then granted the right to staple goods ("ius stapulae") and was also exempt from paying customs in the territory of an entire country. Such legal privileges attracted wide group of active merchants led by the group of Jewish entrepreneurs (the remnants of the Jewish community's activity is the Jewish cemetary from the 17th and the 18th century). From 1618 to 1621 the Governor of Krakow,
Stanisław Lubomirski founded the Parish Church dedicated to the Assumption of the Most Blessed Virgin Mary. The church was one of the first religious foundations of the Lubomirskis in the region. The interiors of the temple is uniform in its structure, characteristic to the 17th century's Baroque. The stalls date back to 1671. Example of an interesting architecture is shown in the Baroque presbitery from the first half of the 17th century. The remnants of the Magdeburg settlement can be observed in the town's architectural arrangement with the squared marketplace and the streets leading their way from the street corners. There, the dominant role plays the town hall from the early Baroque, which was erected around 1620 and was overbuilt and reconstructed in the 19th century.

The history of Nowy Wiśnicz is undoubtedly associated with the Governor of Krakow, Stanisław Lubomirski. After Piotr Kmita’s heirless death, the Castle in Wiśnicz was inherited by the family of Barza. Later on, the castle was repurchased by Sebastian Lubomirski in 1593 for the amount of 85 000 Polish zlotys. After the death of Sebastian Lubomirski in 1613, the residence of the Lubomirskis was inherited by his son, Stanisław Lubomirski, who with the help of a court architect Maciej Trapola, rebuilt the castle, which made it one of the most magnificent fortresses of the early Baroque.

With the goal in mind of raising the importance of the castle and ensuring adequate economic stability, Lubomirski founded in the territory of the nearby colony Rogozie the new town called Nowy Wiśnicz. It was officially announced on June 8th, 1616 when the King Sigismund III Vasa signed the settlement act based on the Magdeburg law. The town was also granted many legal privileges such as the staple rights of wine, copper and iron imported from Hungary as well as the customs exemption law in the territory of the entire Republic of Poland. The town was also permitted to hold three annual fairs: “One held before the Day of the Saint John the Baptist, the second one – before the celebration of Transmission of the Saint Stanislaus, and the third one – as an additional holiday after the Palm Sunday”.
One’s attention can be drawn by interesting buildings such as “the Lord’s Mansion” (Rynek 13) from the 18th century, rebuilt in the 19th century, the mansion housed the famous Polish artist Jan Matejko. Another interesting edifice from the 17th century has the address of Rynek 20. The residences from the 17th and the 18th century are the remainder buildings from the tragic fire in 1863. Unfortunately, the original town structure can only be seen in the drawings of Jan Matejko. It is also important to note that at the base of the castle there is the wooden Classicist manor house called “Koryznówka”. It used to be owned by Leonard Serafinowicz, brother-in-law of Jan Matejko’s wife and today it is the Museum of Jan Matejko.

The Town Hall in Nowy Wiśnicz

The town hall, which was founded by Stanisław Lubomirski was built in 1616-1621. Initially, it used to be the one-story edifice with a gallery and a roof shaped in a form of a Baroque onion. After the fire in 1863, the additional story was added to the town hall and the shape of the tower was modified. Nowadays, the tower is a square with three floors, which has a staircase and a leadway to the gallery. 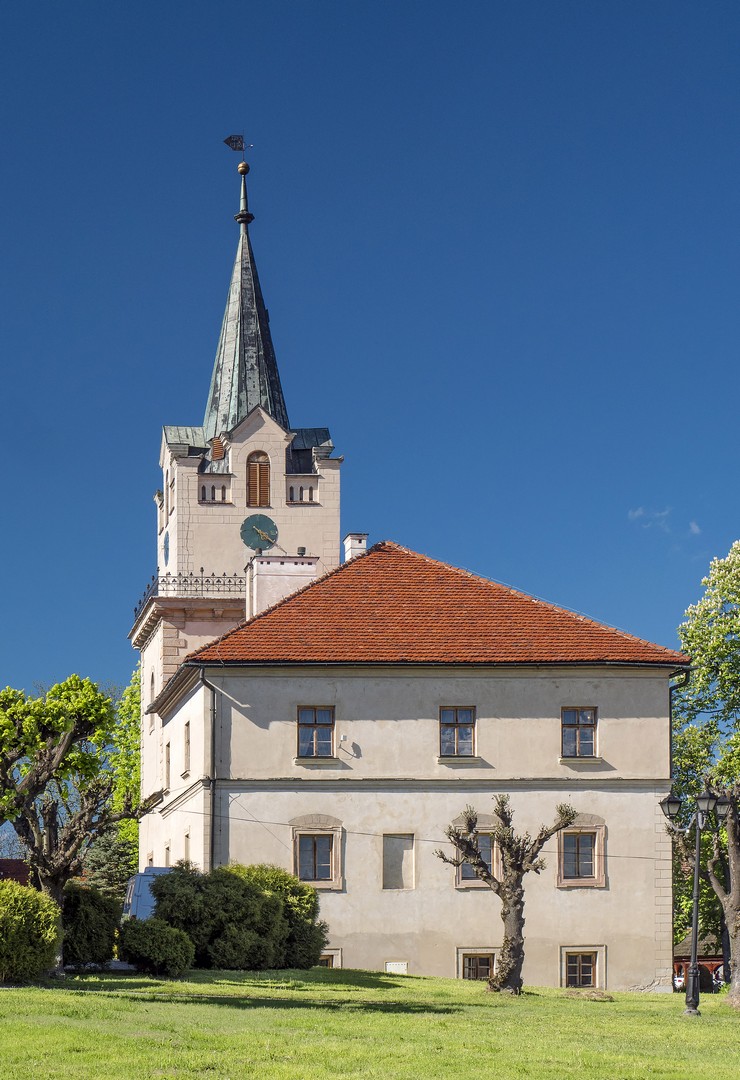 The Monastery of the Discalced Carmelites

On the hill next to the castle, there is the Monastery of the Discalced Carmelites (1621-1635), which, in history books, is listed as one of the most spectacular buildings of the early Baroque. Altogether with the Christ the Saviour Church and the accompanying fortifications, it was the greatest gift of the Governor of Krakow, Stanisław Lubomirski. In the 17th century, he was famous for his foundations of sacred temples and modern fortesses in Małopolska. Construction of the monastery was a votive offering made back then by the magnate in the surrounded by the Turkish army campground in Chocim in September of 1621. The monastery, which was located on the highest hill in Wiśnicz, largely dominated the view of the landscape. Surrounded by strong bastion fortifications, it protected the castle and the town on the Southern side and at the same time, it was relatively isolated from the town.
Construction and architectural works were carried out until the death of an Italian court architect Maciej Trapola on 30 December 1637 . On 22 June 1630, Rector of the monastery agreed to perform novitiate in Wiśnicz. On 2 July 1642, the Theological Collegiate was created, which later on was planned for abolition by the Austrians. Starting from 1629, the church and the monastery was being built by the Tatar prisoners who had been kept in prison by Lubomirski. On 1 July 1635, the church was consecrated. The founder well endowed the church with silver, liturgical vestments and golden vessels with gemstones. He provided the foundation with land and decrees from 10 May 1647 on sacredness of the immovables and movables of the monastery.
On 1 September 1655, the Swedish took over the castle and the monastery and shortly afterwards, they set it to fire during their evacuation from Wiśnicz.
In 1783, the monastery was abolished by the Emperor Joseph II. The artworks were taken away to Vienna and the library to Lvov. The monastery became the court of law and the criminal prison and the church became the prison chapel until 1939.

The Holy Spirit Church in Chronów

The Holy Spirit Church in Chronów was built in 1685. Over the past centuries, it was under few reconstructions, one of which result was combining the church and the tower into one edifice. The niche and the presbitery is covered with one shingled roofing and the walls are boarded. The tower dome and the little bell towers are covered with plate. The central nave is lined with craddle vault and the aisles have plain ceilings. The interior of the church is made with polichromy from 1930. The church’s furnishing dates back to the Baroque, where the main altar plays the major role; it is decorated with the painting of the Pentecost and beautiful spiral columns. the sided altars are decorated with the paintings of Our Lady of Providence and the Heart of Jesus. The most interesting artwork of the church was the painting from the beginning of the 16th century on the Martyrdom of Saint Kryspin and Saint Kryspinian. It currently belongs to the Diocesan Museum in Tarnow. The church belongs to the Wooden Architecture Route in Małopolska. 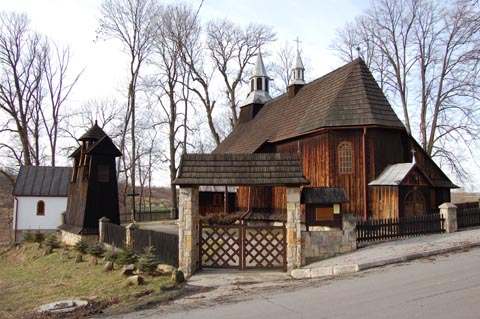